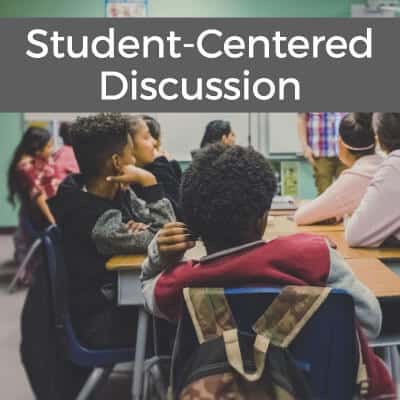 This article was written by Jenn Breisacher, Founder of Student-Centered World.

It is easy to acknowledge that we are living in the most technologically advanced moment in history.  We have everything we need at the click of a few buttons (or a few words from a voice command, depending on how fancy we want to be).  It can be argued that we are more connected as a people than we have ever been before. You can talk to someone instantly on the other side of the world and have whatever you need in a matter of days (or even hours in some cases…thank you Amazon #primenow) without even leaving your home.

But in a world where we are so connected, have we lost touch with one another?

Some of the most simple gestures and social aspects of life seem to be going by the wayside.  Those intimate interactions with other people that we have modeled for us as children are being slowly lost to those clicks.  We see it everywhere: people staring at their phones instead of interacting with one another. There isn’t a bus, park bench, or even restaurant where you won’t see this at some point during your time there, however fleeting it may be.

Where communication was once commonplace and innate, must it now be taught?

Are the basic levels of interaction becoming something that needs to be taught outright as opposed to just learned by being around others?

Z
Do you want to learn more about creating student-centered discussion in the classroom? Learn a simple format that is extremely effective and requires zero prep-time. (busy teachers, we’re talking to you)

As an Educator, I can attest to the changes that I see in my classroom every day…

I began teaching in 2007, right on the cusp of the cell phone boom.  I had my first cell phone in 2002 (mind you, it was a Nokia and the fact that it had the game “Snake” on it made me the coolest kid around).  Past that game, it simply made phone calls and was only used for safety measures. Never before could you potentially break down in your car and not have to hope there was a payphone nearby.  In 2008, I remember the first time I saw a friend on his brand new Blackberry. Wow! What technology. You could actually have access to the internet without a computer…it was mind-boggling.  We were out celebrating a friend’s birthday and I remember thinking how odd it was that he kept fidgeting on his phone. Little did I know it would be a precursor to that being the norm.

As the changes in cell phones came, and smartphones became the norm, there began to be a distinct difference with the students I saw in front of me.

Their interactions with one another became…odd.

I have always encouraged a laid-back atmosphere in my classroom; as long as work was getting done, off-topic conversation never bothered me.  You get to know more about your students when you can engage them outside of your curriculum.

However, their interactions with each other became less about discussion and more about what was online.  Sometimes if they had a little free time, they wouldn’t talk with each other at all and would just be flicking away at their phones.

The difference between my first year of teaching and now is staggering.

Personally, I have embraced cell phones in the classroom.  My school does not have a policy about their usage and leaves it up to the teacher, so about three years ago I decided to use them as a research tool and have my students download apps that would be helpful to my course.  Frankly, though, I did this because I gave up on fighting the fight. I spent more time trying to wrangle the cell phone usage than I did anything else. I actually had some students fight me that they weren’t using their phones when I would discipline them for it because they literally had no idea they had been using their phone.  It was nuts.

With this change in technological usage came a complete lack in those basic communication skills that you and I grew up to know and use without thinking about it.

The Challenge Teachers are Facing

In 2007, I could tell my students to discuss something with one another and with some basic guidance, they were up and running.  Now if I tell my students to collaborate (not even discussion based with a higher level of thought involved….I mean just working together on an assignment) they legitimately have NO IDEA how to do this.  If I don’t break it down for them on how to work together, they simply break the assignment up into parts and quietly each do their piece. For a long time, I took for granted that they should know how to do this because up until then, high school students always knew how to do this.  However, when the cell phone boom came along, those soft skills were lost along the way.

This in and of itself is why I think student-centered learning is SO important in our society today.  As teachers, it is so necessary to focus our students and teach them the skills that, until now, have always been understood and expected.  What is now known as “21st-century competencies” used to be, simply, how people got things done. Our students today are lacking in the basic areas of creativity, critical thinking, problem-solving, and collaboration.  It is so necessary for us to take a step back from pushing content (they can have those answers with a few clicks, don’t forget) and instead, using that content to help them develop these skills.

This is something that hasn’t really be expected of teachers in the past.

A teacher’s job has always been to present content to their students and to make sure that content was understood.  Is that really as necessary in the world today? While certain understandings of content should be understood, it’s more important that our students know what to do with that information in a more productive way.  The hard part is that most educators haven’t really been trained in this concept. (Or other great techniques such as the Epiphany Question Method)

The Power of Discussion

With the change in times, it is important that we as educators stay current with methods that will be the most successful in the classroom.  We need to find trainings with new methodology and techniques that will benefit our students not only within the walls of our schools but in the real world as they enter the job force and other avenues of life.  It isn’t our job just to teach content, but to prepare our students for the real world.

To do this effectively is to help train them in the areas that our currently school-aged generation is lacking in, specifically communicating with one other.

Programs like Aristotle’s Cafe is a wonderful way to make sure we are doing this service for our students.  It is important that if we are pushing this model in the classroom, we are doing it properly.  To encourage our students to talk is one thing, but to understand how to truly facilitate that is another.  When do we get involved? How can we use body language to make students feel comfortable?  When do we let the conversation roll?  How much of a hand do we really have in what is being discussed?  Knowing our role in this facilitation process helps it not only move forward more effectively but helps the process of student growth progress more than if we were struggling to figure it out at the same time as them.

The data has proven for years that people learn more by doing.  By having your students sit at a round table and have a discussion on a specific topic is no different.

Personally, I have had my students do an activity like this on the American Civil Rights Movement of the 1960’s.  I open the conversation with a general question and then they go for it. Our classes are 80 minutes and rarely do we have a group that ends much before that.

As a matter of fact, most groups go right up to the bell and then ask if they can keep going.  They go back and forth with all kinds of factual information and points of view and figure out the appropriate way to challenge one another in a respectful way.

On their own, they bring up connections to today and start asking the hard questions that there simply aren’t answers to.

They find out more about one another and even themselves than they knew before the conversation began.  They get more out of this discussion than with any other activity or assignment I could come up with for them and it hits on every one of those 21st-century skills that they need to be working on.

It’s beautiful and the amazing thing is that never had I had one conversation go in the same direction as the next.  It’s fascinating and wonderful all at the same time.

You Have the Power to Empower

In the end, we all decided to be educators to make a difference.  The best way we can do that now for our students is to open them up to the concepts and actions we used to take for granted.  As a society that is completely interconnected, we lost our ability to connect with one another in a non-digital way. By giving them not only the skills but the opportunities, to practice and hone in on these skills, we are giving them the biggest “leg up” that we possibly can as teachers and mentors to this younger generation.

By encouraging our students to have honest discussions with one another in the safe environment of our classrooms, we are helping them with skills they will use far beyond our walls.  They will learn how to interact with one another, challenge ideas, and advocate for themselves and their beliefs. These are skills that society as a whole really needs to work on in the climate we live in.

In essence, by training our students to do this appropriately, we are doing our small part to ensure that the next generation will be able to tackle this world head-on and be successful global citizens.

Say thanks to Jenn & Learn More About Her Work

We hope you’ve enjoyed this interview and we’d like to give a big thanks to Jenn for her insights.